You are here: Home | Product Articles | Types of plastering

Plastering is a process by which coarse surfaces of wall or ceiling roofs are changed or turned or rendered to provide smoothness. In the beginning, wet materials are spread over the block or brickworks and then suitable equipment is used to make the surface smooth level.

The prime purpose of plastering is to obtain a hard and smooth surface that could be painted and provide nice aesthetic appearances.

1.Lime Plaster: Lime mixture consists of sand and line that are mixed by 1 sand to 3 of lime by volume. Not only this mixture is used for undercoat but also used as a finish coat.

2.Gypsum plaster: Gypsum plaster is widely used plaster materials that could be mined naturally or produced as a by-product. So, important gypsum plaster that is employed as an undercoat, finish coat and replaced lime and cement broadly.

3.Smooth-Cast Plaster Finish: To obtain a smooth cast finish, the mortar used should be in the ratio 1: 3.Fine Sand should be taken to prepare the mortar. For spreading the mortar, skimming float or wood float is the best suitable tool. Hence, smooth and leveled surface is obtained finally. 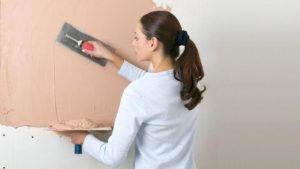 There are different types of plasters are available such as:

When lime is used as a binding material it is called lime plaster.
Lime plaster is a type of plaster composed of hydrated lime, sand and water.
Lime plaster is similar to lime mortar, the main difference is based on use rather than composition.
Mortar for lime plaster is usually prepared by mixing sand and lime in equal proportions, to improve the strength small quantity of cement is added to it.

The surface to be prepared exactly in the same manner as that of for lime plaster or cement plaster.
Mud plaster is generally applied in two coats, the first coat being 18mm thick while the thickness of second coat kept 6mm.

Stucco is the name given to decorative type of plaster which gives an excellent finish.
Stucco plaster can be used for interior as well as exterior surfaces.
It is usually laid in three coats making the total thickness of plaster about 25mm. The first coat is called scratch coat, the second coatis called fine coat, it is also known as brown coat and the third coat is called white coat or finishing coat.

In the US, the there are two main types of plaster, and they have different properties.

cement plaster uses cement as the binder; it is water resistant (not waterproof), it is weather resistant; and it is typically built up in two or three coats to 5/8″ or 7/8″ thickness. When you see plaster on the exterior of a building, it is cement plaster. Also known as “stucco” . Cement plaster “recipes” have varying amounts of portland cement, lime, sand and water. Lime will make the plaster easier to work, but it can result in a slightly longer curing time. (old plasters — like in the deep south in the US, were almost entirely lime plasters, and they could take 6 months to fully cure for each coat).
Gypsum plaster: this uses gypsum paste as the binder, and it is extraordinarily hard and strong — but its not water resistant. This is used typically for interior walls, and was the primary way of fireproofing walls before gypsum wallboard was invented. We still use gypsum plaster for impact resistant surfaces — like in jails or prisons. You can get up to 1500 psi for the surface. It is typically applied over a plaster base, but the plaster itself is usually not more than 1/8″ inch thickness, applied in two coats.
The disadvantages of plaster from a construction standpoint is the multiple passes of labor over the same location. it generally takes 24 hours for a plaster coat to cure, so if you’re doing two or three coats of plaster it means that you scaffold and staff up the same wall three times in a row. We’ve usually seen a substitute for this work by using an acrylic based finish system, which can be done in one pass. That discussion is best saved for another time.